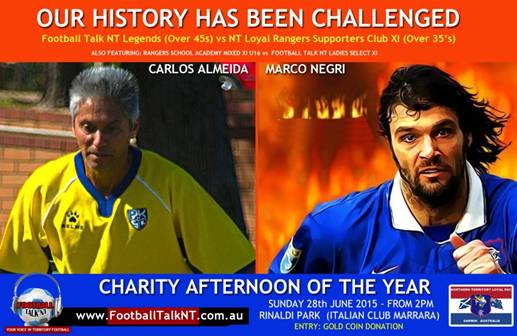 On 28 June 2015, Football Talk NT partnered with the NT Loyal Rangers Supporters Club for an epic game to raise funds to support Fernando Ricksen, a former Rangers captain who was diagnosed with Motor Neurone Disease at the young age of 37.

The NT Loyal Rangers Supporters challenged the retired over 45 Northern Territory players of the 80s, 90s and 2000s to a game against their over 35’s team.

It was a fun filled day featuring the battle of the strikers between former Rangers and Italian SerieA player Marco Negri and Football Talk NT's Carlos Almeida (ex - Darwin Olympic, Hellenic and Casuarina Star of the 80s).

Presentations followed the games at the Italian Club, culminating in a big pizza night for everyone that attended.

Games on the Day

Through the day: Jumping Castles / Canteen / Bar Service at the Club

Join our Facebook Group for more photos and videos